A multi purpose bot with the intention of being your one stop shop for all bot needs.

Learn more about each feature by clicking the link

The Tracker system allows users to specify a Twitch Streamer or YouTube channel and will post an embed when they go live! Users can also specify a specific channel for the embeds to be posted in as well as a role to tag and custom flavor text! 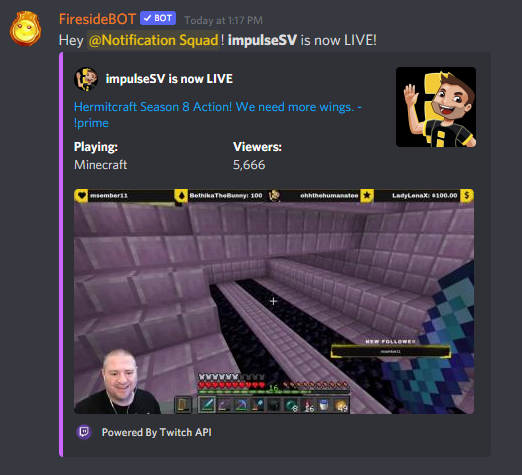 Server logging allows server admind to keep track of useful information. While this information is available in the Audit Logs section of the server settings in Discord, Fireside displays this information in a cleaner manner as well as allowing admins to be notified when changes happen.

Fireside also allows you to turn off certain modules from being tracked so you can view the modules most important to you!

The Currency and Economy system allows server members to gain currency for server activeness. The name and rate at which members get currency is customizeable through commands as well.

There are a couple casino type games to use the currency on like Black Jack and standard gambling. 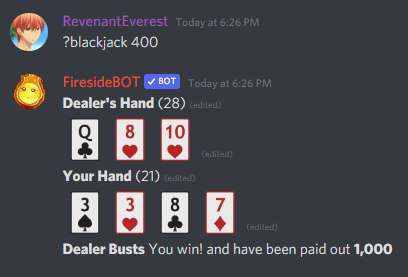 Ranks allow server members to level up in their server based on their activity, similar to the Economy system. Server admins have control over creating new ranks and determining the amount of EXP a member gets per message as well as how hard it is for members to rank up.

See how you compare against your friends! 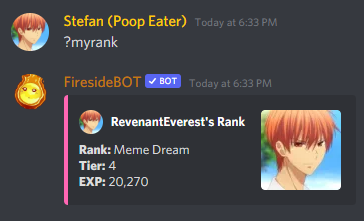 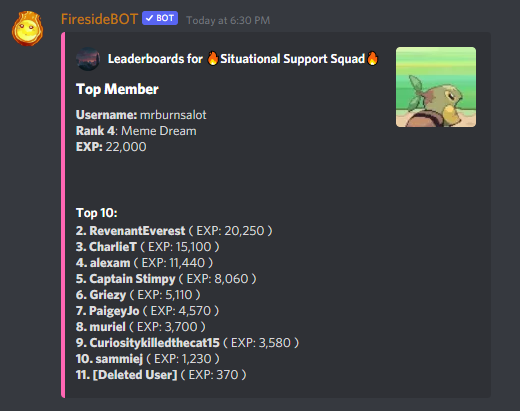 Auto Role is the simpilest feature to explain! It allows server admins to assign a role to be given to new server members.

Custom Commands allow server members to create fun new server specific commands. The custom command system uses “variables” which allow command creators the ability to add functionality to a command. Below are a list of the current variables, what they do and an example of how to use them. Variables will always be contained within the syntax ${} for example having the touser variable look like ${touser}. 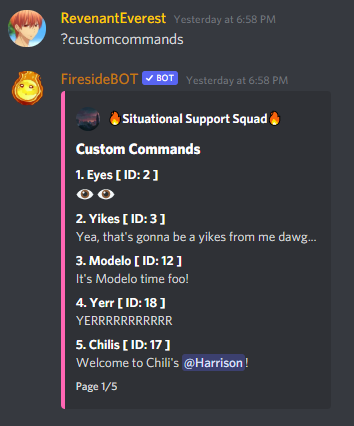 Role Reactions allow server admins to set a role to be posted to an embed by Fireside and tracked for reactions. When reacted to, the server members gains that role and if they unreact that role is removed.

Useful to big servers that want new members to acknowledge a #rules channel before gaining access to the rest of the server.

Or for MMO communities that want to know what role is preferred by each member (Tank, DPS, Healer). 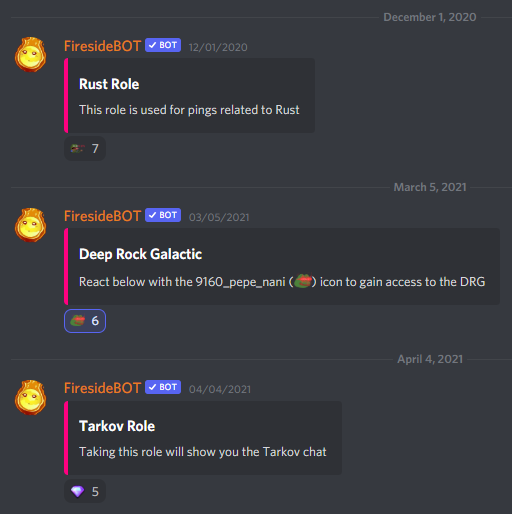 The Welcome Message feature allows you to send a DM to a new server member. Use this feature if you want to thank new members for joining and/or help them navigate the server!

The music functionality of Fireside is by far the most extensive. Taking what’s already offered by a multitude of Discord Bots and expanding on it.

Fireside offer playlists that are user specific and server specific. Users can use their playlist in any server that uses Fireside and server admins can define playlists available for use by members in their server.

Like a song that’s currently playing and want to quickly save it for later? Click on the heart reaction on the current song embed and save the song to your default “Liked Songs” playlist! 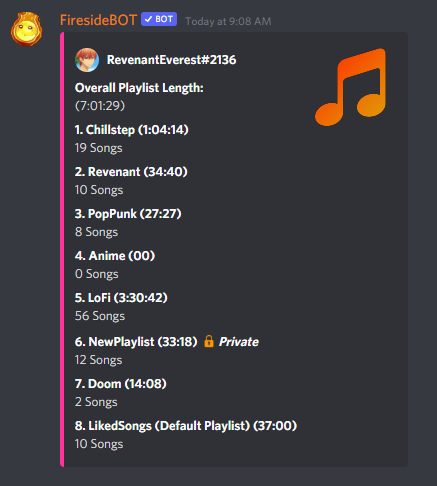 There’s much more that Fireside has to offers, so invite it to your server and check it out!

If there’s a feature you’re interested in but that’s not listed here, join the Support Server and let me know! I’d be happy to try and implement it for you.